Virtual Tour of the River Pool

Welcome back. The final section of river to be covered in this series of Virtual Tours of the Ravensbourne Catchment is that of the River Pool. The most western section of the catchment and possibly the most engineered, the Pool comprises a number of streams within its broad watershed. A journey N to S would see the Pool leave the Ravensbourne at Catford and travel S before the Beck and Chaffinch Brook split within Cator Park, in Beckenham. The Beck continues SSE, with the East Beck moving away east at Langley Park. The Chaffinch Brook travels SSW with the St James’ Stream later providing an SSE branch with the South Norwood Stream coming in from the W, and the foot of the Crystal Palace scarp, which separates the Wandle Catchment from the Ravensbourne, at South Norwood Lake. 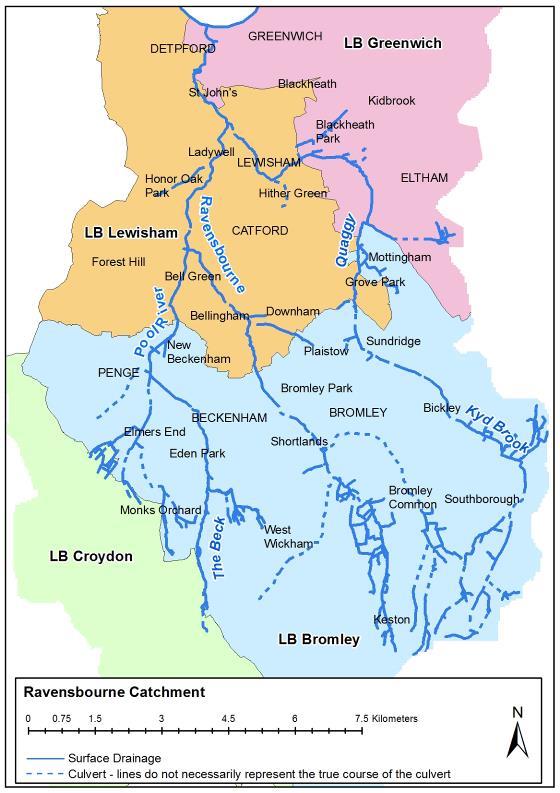 Pool River to the W of the Ravensbourne Catchment

The Beck, arguably the longest river in the Pool section of the Ravensbourne, rises from a chalf aquifer near Spring Park, West Wickham, and travels NE through Blackheath Beds, skirting Thanet Sands to the E and London Clay to the W. The Beck flows north through underground culverts and piping and is occasionally overground through back-garden ditches until it reaches Langley Park Nature Reserve.

Silt transportation is a big issue along the Beck. With so many small outfalls and ditches coming into this river from a very broad watershed, when it rains it becomes very “flashy” and carries a good deal of debris downstream.

An autumn Beck, with sandbags to prevent washout and slumping

From the east we welcome the East Beck, with its origins over in Pickhurst Green, where it ducks underground to eventually reappear and feeds the pond in Langley Park Golf Course before proceeding NW towards the nature reserve and Unicorn School. This is the first of the big project opportunities within the Pool branch of the Ravensbourne catchment. First, the Environment Agency KSL (Kent, South London) branch were proposing flood mitigation measures to prevent flooding amongst residential properties, these included the introduction of bunds to prevent over-topping. The second considered opportunity, which is a Thames21, and possibly Bromley, project that seeks funding and aims to redirect high flows from the East Beck into a meadow leading to the resurrection of an old pond. This would act as a wet woodland and flood storage area, which would ease pressure downstream and become an excellent area for outdoor riparian education.

The Beck continues onward and reaches Kelsey Park, where it feeds into the ornamental lake. Transported silt finds a home here and it is possible for ducks to stand up in the middle of the lake. Of course the silt needs draining but money is always an issue.

From Kelsey Park the Beck runs under central Beckenham to reappear in a narrow and often tight culvert on its way to joining the Chaffinch Brook in Cator Park, where it will wait for a minute.

The Beck as it enters the Chaffinch Brook at Cator Park.

The Chaffinch Brook begins life at the Stroud Green Pumping Station in Croydon. This situated over an aquifer and pumps the water out.

The Chaffinch Brook then travels through allotments, over Poppy Lane and then opens out briefly across the end of Laburnum Gardens. Heading NW the elusive brook ducks in and out of gardens, resurfaces at Fairford Close before a 300m tunnel under Elmers End Road before it runs partly as the old moat stream at South Norwood Country Park and partly parallel, underground along the roadside.

From the W the South Norwood Stream enters the country park ftom its source at South Norwood Lake. This channel travels through Blackheath Beds following their denundation through the surrounding London Clay.

The Chaffinch Brook and the South Norwood Stream both travel through eroded and damaged channels within the country park before exiting through and out into Dorset Road Allotments. This conglomeration will now make its way toward Cator Park, where it will meet the patient Beck.

The last of the Chaffinch Brook triumvirate is the St James’ Stream. The St James originates in Shirley, within the old Spring Park Farm. This is now known as Millers Pond. There is an active Friends group looking after this site.

The St James’ Stream flows due north through Monk’s Orchard, above ground with many minor order streams joining at this point, after this it proceeds mostly in engineered open channels up and beyond the western perimeter of Bethlem Royal Hospital. The EA, mainly due to drainage issues, annually undertake channel maintenance.

The stream remains in a concrete culvert, flows under Upper Elmers End Road before discharging to the Chaffinch Brook, NE of Elmers End station, this culvert is 1.2kms in length and contains various surface water sewer connections. This would explain the Environment Agency’s determined efforts to try and resolve this particular issue, with planning for swales, bunds and SuDS projects as well.

With the St James’ Stream now joined with the Chaffinch Brook, the river carries on straight N into Cator Park, within a culvert. It is met first by the Penge Stream from the W before the Beck enters from the E.

The Beck arrives at the Chaffinch Brook in Cator Park.

Cator Park is an area of huge opportunity with park land on either side of the river, concrete culverts that could be removed and possibilities for meanders, swales, reedbeds etc. This would not only slow the flow, and reduce flood threats downstream, but could introduce a range of biodiversity currently lacking in this well-manicured park. Maybe a secondary channel, incorporating the Penge Stream, could be attempted. At Cator Park all of these tributaries become the River Pool proper.

From here the concrete culvert broadens, with some nasty outfalls adding pollution into the mix.

Joe Pecorelli of ZSL explains: “At the moment, reporting of problem outfalls is ad hoc from members of the public who happen to spot pollution entering our rivers. Once notified, the Environment Agency and Thames Water put the offending outfalls on a list. Reported outfalls are resolved over a five-year investment period by Thames Water’s Surface Water Outfall Programme (SWOP) team.

Many of the polluted outfall material between Cator Park and the River Pool Walkway Open Space at Lower Sydenham appeared to be builders material that had been dropped down a roadside drain. This happens often. In Bromley, Glassmill in particular, there have been instances where DIY oil changes have taken place above ground and the dirty oil has been poured into the run-off inlet, and out into the river.

All of these incidents had been reported to Thames Water during the debrief session following the October/November 2017 Outfall Safari along the whole catchment.

The Pool breaks out of the the culvert by the HSBC Sports ground to the E and becomes more naturalised by the River Pool Walkway.

A wade in the river at this point becomes treacherous, for a variety of reasons. Firstly there is a lot of immediate overhead tree cover.

Wooded debris in the river itself has allowed the river to gouge out the substrate, making it very deep in places. Lastly, there is a spray paint business along this stretch and it is apparent that much of the waste paint finds its way into the river. Ethnographical evidence from the walking public further down the river suggests this is a regular occurrence. Moving on, and under Southend Lane.

N of Southend Lane sees the start of Linear Park, and the Waterlink Way. This is also Cycle Route 21, which runs to the Thames from here. The next section of the Pool, all the way to the confluence with the Ravensbourne at Catford, has been restored and managed by Lewisham Council, Thames21 and in particular Vic Richardson and his gang. Vic is an entirely capable, rough and ready type unafraid to take on any kind of restoration and improvement job in a river. He also provides camp fires, tea and cake for all his volunteers.

Den Collier guides a corporate group up the Pool

This has become a beautiful section of river with plenty of in-channel features that both provide habitat for invertebrates and birds while doing the important work of oxygenating the river itself. Introducing stakes and faggots to narrow the river at certain points also provides a variety of speed and depth that fish, and future Prime Ministers can take advantage of. Boris fell in during the 2009 3 Rivers Clean Up. The 3RCU is still an annual event along the catchment. This year’s event may be put back until the autumn given the current restrictions.

Boris Johnson makes a meal of it with Thames21 CEO Debbie Leach getting soaked as well, trying to save him.

This stretch, down by the water, is now passable on foot, having been cleared by volunteers. Sparrowhawks have nested here and kingfishers are common.

There is an outfall, to the W, and just upstream of the Ravensbourne confluence, where the fish passage exits. The weir at the confluence is too steep and so the passage circumvents this obstacle to allow fish and eels to move upstream.

As in the Virtual Tour of the Ravensbourne, I am posting a photo of the Pool/Ravensbourne confluence.

In Early to Medieval times in Britain and elsewhere, the confluence of rivers was a place of spiritual renewal and of worship. The wells within the Ravensbourne catchment were thought to contain water that would heal ailments to the eyes. Gatherings would take place at river confluences and ceremonies be performed. When we look at our man-made constructions around river confluences within this catchment, it is good to just take a minute to think about this. The sound of the meeting of rivers, the light reflecting off the riffles and pebbles gleaming.

This is the final installment of the three virtual tours of the Ravensbourne’s rivers. I hope you’ve enjoyed them and I look forward to seeing you on the riverbank, and possibly in the river, when we can finally break off the shackles of this current pandemic.

I am indebted to the following for advice, ideas and general help with this section: Donna Davis, Julia Grollman, Vic Richardson and Paul Browning.

Paul Browning’s absolutely fantastic blog on local rivers, history, events etc is HERE and I thank him again for letting me use some of his images.

Thames21 have some good background to London rivers and are currently running a number of Lockdown exercises to keep us match-fit, they are HERE

The London Borough of Lewisham has funded the restoration of the Pool, and most of Vic’s work along there, and their great nature-based blog is HERE

Lawrence Beale Collins ran the Ravensbourne Catchment Partnership from 2014-18 and has worked along these rivers for a decade, most of that time has been with river charity Thames21. He was born in Lewisham and grew up next to the Ravensbourne’s source. He now lives near the confluence with the Thames.

4 Responses to Virtual Tour of the River Pool